The most special of bonds: Two Sisters’ stories

I have written about Andrew and his autism spectrum disorder dozens if not hundreds of times over the years, his accomplishments and challenges, school placements, the medications tried with enormous amounts of both trepidation and hope, quirky obsessions and downright mind-boggling behaviors, savant-like skills, and how autism as a whole effects our family.  This blog contains a whole lot of “the good, the bad, and the ugly” about how Andrew lives with autism, as well as what being an autism mom means for me.

What has never been included here, however, is how Andrew’s special needs have affected his siblings.  Andrew’s three sisters all had the opportunity to write down their thoughts, the younger two decided to accept the challenge.

They say things better than I ever could, through the lenses of children who perhaps have lost a bit of their childhoods because of their brother, despite the fact they love him very, very much.  Keep reading for a honest portrayal of being the “sib” of a brother with autism, written by those who will be around long after I am gone and hopefully still love him.

E‘s story:
My brother Andrew is very special to me.  My brother and I had a great relationship and would do everything together, at one point I was the only one he liked and the only one that could calm him down. As we grew up I started realizing that Andrew and I had changed and he would embarrass me in front of my friends. Today Andrew always says how much he hates me and calls me “Buggy Emily”. Every day is a challenge with Andrew. His Autism has changed our family but at the same time I couldn’t imagine him with out Autism.  Even though Andrew says he hates me, I will always love him.
As Andrew’s sister, I have seen him seen him go through different phases and seen him grow up. He has always loved weather and wants to be meteorologist. He loved having the chance to meet the local news station’s weather man who he now stays in touch with. Andrew has also had an obsession to Blue’s Clues several times and made a board game about it.  Andrew used to go to our cat Maddie when he was mad and would say “Hi Maddie, with the pretty pink paws.” He also has a huge obsession with Build-A-Bears and he talks to them.  All 30 something bears are very loved and you can tell if you look at them. In the end Andrew is very special to me. 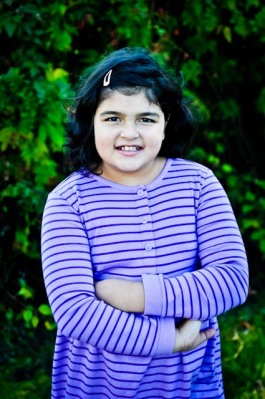 Having a brother with autism is very hard.  It is hard for many reasons, including:

But there are good things about having a brother like Andrew:

One reason why it is hard for me to live with Andrew is that it sometimes feels like he gets all the stuff and I don’t get as much.  Another reason is that since he goes through phases very quickly he might want to play with you and want to do things with you one day, and the next he may seem to hate you and even want you to live in a different country (he has actually said that).  And your plans can always have to change because he may want something and it is hard for my parents to solve the problem.

I was assigned to write a “Concrete Poem” for school, which is a poem in which you combine art with the careful arrangement of words- in, around, or used to create the image.  I wrote about having a brother with autism.  This is my poem:
My brother has autism.

It is hard for some.
It can make you feel glum.
It can be very hard to overcome.
Although life can change every day,
And sometimes you don’t get your way,
Yet, with my family I want to stay.
There are reasons that it is good and bad to have a brother with autism. But it is not one of the hardest things to do and it can be overcome.
Written by S, age 9 (dictated)